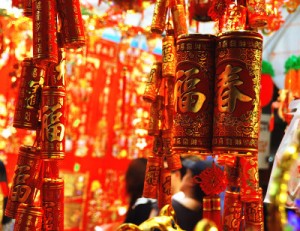 There have been a number of articles in the news recently about what is happening in the Chinese economy relating to the macroeconomic and international trade topics that are in the IB Economics syllabus.  There are a number of articles that you should read linked at the bottom of this brief commentary about the situation.

At the moment the Chinese government is worried about the rate of inflation (it has fallen from 5.4% to 5.3% recently) and has said that this is it’s top priority.  It has already been taking some action to tackle the situation, and this has resulted in slightly lower economic growth; but it is more worried about the social and political unrest that it could cause if it rises further.

Inflation is a rises in the general or average level of prices, and so the price of one product rising on its own isn’t inflation.  In fact, some prices can and actually have fallen; in one article it mentions that a man driving his car and renting it out has had to lower the price he charges as the rising prices of other goods mean that people have less money to spend.

Although inflation is not the rise in the price of just one good, we need to remember that as it is a weighted index (the importance of the goods in peoples spending is taken into account), and that some goods have a bigger influence on inflation than others.  Food and fuel, in particular, have been rising in price and have exerted a larger impact upon the level of inflation.

Food prices have been rising for a while now, and some food products have been rising at more than double the rate of inflation.  This is an important consideration for the government as we need to remember that this doesn’t affect all sections of society equally.  It is the poorest who are hit hardest by rising food prices, as they spend a larger proportion of their income on it.  As they can’t do without food, it means they have less income to spend on other goods.  The rise in food prices has been worldwide with a number of the world’s major producers having problems; flooding in Canada and Australia, and drought and fires in Russia.  This has been coupled with rising demand for food with a growing world population and a couple of years of good harvests (the increase in supply in these years had reduced the prices.).

The other major product that has led to rising prices is oil.  The political unrest in the Middle East and North Africa has led to rising oil prices.  Oil is a product that has wide reaching effects as it increases the price of most goods as it is used for transportation and in the production of many goods.
Some have also attributed the rising inflation to China’s previously ‘loose’ monetary policy.  A loose monetary policy (the use of the interest rate to affect aggregate demand) is one that allows aggregate demand in an economy to grow, and involves lower interest rates and making it easier to borrow money.  A lower interest rate increases aggregate demand as consumption increases (AD = C + I + G + (X – M)) for a number of reasons; those with existing loans have a higher disposable income as the loan repayments are lower; products purchased on credit are effectively cheaper, stimulating the demand for them; and saving becomes less attractive, resulting in people becoming more likely to spend any additional or spare income they have.

As aggregate demand increases as a result of a looser monetary policy, it cause a shift in the aggregate demand curve to the right, from AD1 to AD2, as shown in the diagram below.  This results in a movement up along the short-run aggregate supply curve (SRAS), and the price level increases from PL1 to PL2; and consequently there is demand-pull inflation. 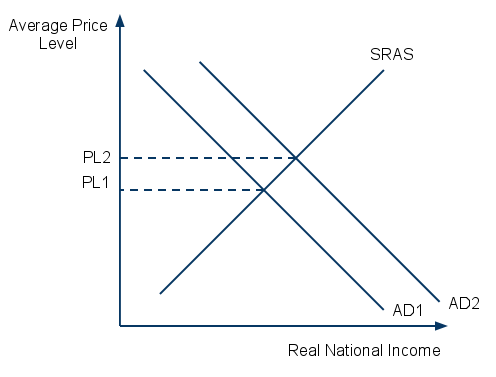 What solutions are they using?

As they as so worried about the level of inflation, the Chinese government are using more than one method to try to restrain the rising prices.  Firstly, they are ‘tightening’ the previously loose monetary policy.  This means that the interest rate has been rising, with the opposite effect of what was previously explained, and also they are making it more difficult for banks to lend out money as they are required to hold on to a higher percentage of the deposits made at the banks.  The result of this that consumption and investment fall, and as these are components of aggregate demand, this leads to a fall in aggregate demand, causing the reverse of the diagram above.

Moreover, the Chinese government are also using exchange rate policy in their bid to fight inflation.  The Chinese currency, the Yuan, is a fixed currency where its rate is controlled by the authorities.  For a while now China has been following an outward-orientated growth strategy, whereby they are focussing upon increasing their exports to drive up aggregate demand and economic growth.  Many other countries have complained in the past that in order to facilitate this the Chinese government has been keeping the yuan at an artificially low rate; this has the effect of making their exports cheaper abroad and thus increasing the demand for them.  It also has the effect of making imported goods more expensive, and this has been felt to contribute to the rising level of prices.

Consequently, the Chinese authorities have been allowing the yuan to rise in value (a rising fixed exchange rate is a revaluation rather than an appreciation which refers to floating exchange rates).  The rising demand for the yuan has not been allowed to increase the price in the past effectively creating excess demand, and now the market is being allowed to move this up towards what would be the new equilibrium. 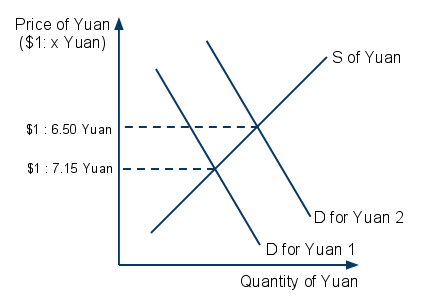 Previously although the demand for the yuan had increased due to increased demand for the Chinese exports (remember the demand for the currency is a derived demand, i.e. it isn’t demand for its own sake but the demand for it comes from the demand for something else), and so the demand curve had shift right from D for Yuan 1 to D for Yuan 2, the price had been forced to remain at the previous price, $1 : 7.15 Yuan for example.  Now the authorities are allowing the exchange rate to rise, and it has risen to the new level of $1 : 6.50 Yuan.  Remember that with exchange rates you need to think carefully about how it is being expressed.  Although the number of each Yuan to 1 dollar has reduced this is an appreciation of the Yuan against the dollar as each Yuan would now be worth more dollars (if the yuan appreciates against the dollar, then the dollar has depreciated against the yuan).  It would be easier if the figures given were expressed as 1 yuan to $x, but this is not often the case in exams and you need to be careful.

As the Yuan has appreciated this has meant that the price of imported goods, especially food and fuel, has reduced.  This is because the price of the goods in other countries has not changed in their local currency, but as the yuan is now stronger less yuan are needed to buy the goods.  This has helped reduce the price of the goods in China.  We would expect this to mean that the level of imported goods will rise and the level of exports will fall.  Both of these would result in a fall in the level of aggregate demand.  But we should remember from the higher level content that it is not that simple, and that the Marshall Lerner condition shows us that what happens to the value of imports and exports, and consequently the balance of payments current account, depends upon the the elasticity of demand for both imports and exports.

What is happening to economic growth?

As we have already said, the tightening of monetary policy and accompanying exchange rate policy would be expected to lead to a fall in aggregate demand.  If we take the Keynesian model, with the long run aggregate supply curve (LRAS) as shown in the diagram below, we would expect that if the level of aggregate demand falls from AD1 to AD2, then this would result in a fall in real national income from  Y1 to Y2.  As we know that economic growth is a rise in the level of national income over a period of time, then this would imply that the Chinese economy would be contracting, i.e. the opposite of economic growth. 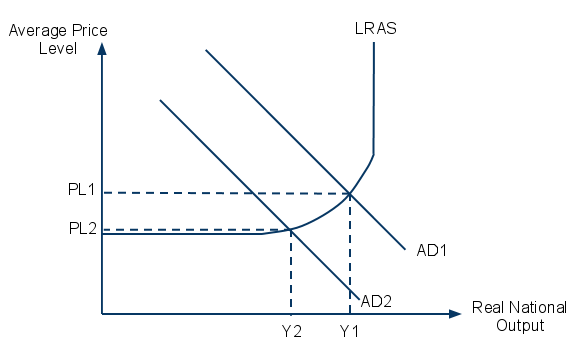 The Chinese economy is not shrinking though, instead it is still growing, albeit at a slightly lower rate.  How is this possible if the theory is correct.  We have to remember that in economics we assume Ceteris Paribus, i.e. all other things remaining equal.  This doesn’t necessarily happen in the real world though.  We need to remember that there are many reasons why aggregate demand in China is growing and shifting to the right.  As a result the tightening monetary policy and exchange rate policy, mean that the size of the shift to the right is smaller, rather than actually causing a shift to the left. This would mean that on the diagram below the effect would be a shift from AD1 to AD3 rather than to AD2.  This also means moving from PL1 to PL3 rather than PL2, which would explain a lower level of inflation (i.e. a smaller rise in prices) rather than deflation. 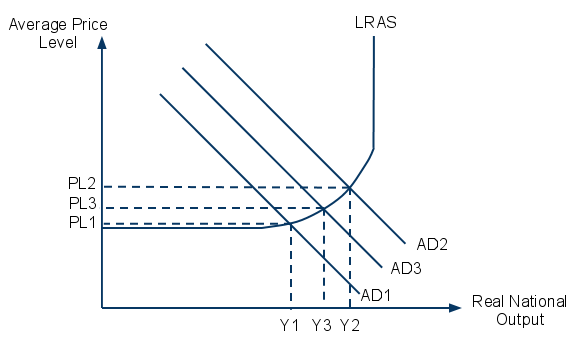 If we were to take the Neo-classical viewpoint rather than the Keynesian LRAS, then although the same explanation may hold true in the short run, with a movement up along the SRAS curve causing both output and price level to rise in the short-run.  In the long-run the markets would adjust to bring us back to the same level of output but with a higher price level.  Remember that at full-employment in the neo-classical model there is still some level of unemployed resources (the natural rate of unemployment) and the reduced level of unemployment and higher output would push factor prices, such as wages, up in the long-run, causing an increase in the costs of production.  This would cause the SRAS curve to shift to the left and bring output back to its original level.  It is important to remember the difference between the long run outcomes predicted by the Keynesian and Neo-classical models for answers evaluating the effectiveness of macroeconomic policies.

There are a number of recent BBC articles that explain what has been happening in China recently and about inflation in general.  The links to some of these can be found below.