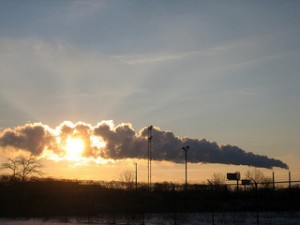 The issue of tradable permits, or cap-and-trade schemes is a important one at the moment, and it is a relevant solution to negative externalities of production in the microeconomics section of the course.  The basic idea is to set a limit (cap) on the amount of pollution and then divide this up into permits that are allocated to firms.  They are then allowed to trade these amongst themselves, with those with excess selling to those with a shortage.  This creates a market and thus a price for pollution.

There are adaptation to the basic schemes, whereby they can also claim credits for investing in certain ‘green’ initiatives.  It can also be used as a development strategy as the firms in more developed countries are likely to be in shortage and can therefore buy from less developed countries which are more likely to have excess, and thus providing them with funds.  One main benefit that is suggested is that it creates a market based solution, and an incentive for firms to reduce their pollution in order to benefit from the sales of the permits.  Furthermore, the number of permits can be reduced over time.

Some people are against the idea of creating a price for pollution and there can be problems of measuring the amounts of pollution.  Also, as pollution does not respect national boundaries it is most likely to be a solution on an international scale rather within an individual country, where it may disadvantage domestic firms in competition with foreign firms who it would not apply to.

The video below explains the concept of tradable permits, and there is also a good animated explanation on a BBC article.